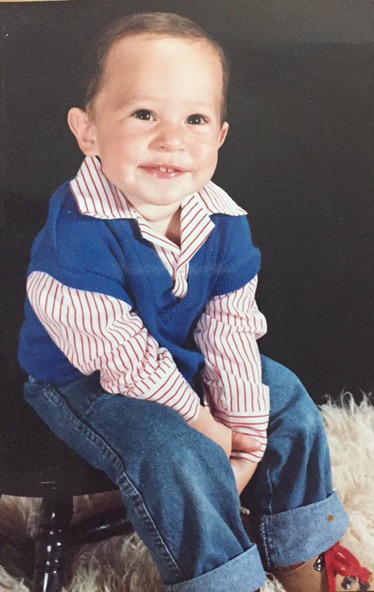 What did the “rock bottom” point of your life look like?  When you found yourself there, did you think it was even possible to go any lower?  I didn’t either.  Honey, I was wrong.

At 23 years old, I was a single mom, a college dropout, broke AF with ruined credit and in fear for my life having just escaped from my abusive ex-boyfriend/father of my child.  We fled to the only safety I had ever known, my childhood home with my parents and my big brother.  Unfortunately, that quiet cul-de-sac in a good neighborhood would not  be safe enough for me.  Turns out, even when a court of law awards you the protection of a restraining order, the bad guys don’t actually give a shit about a piece of paper.

Though I was no longer living with him, the abuse didn’t quit. He would call the house at all hours of the day or night, and being a coward wouldn’t speak to my mom or dad if they answered.  No, instead he saved all of his hatred for me. My poor parents, God bless them.  This was so far beyond the kind of life I grew up living in our simple suburban home.

Daily death threats became my reality.  This unbalanced man, my ex, had become obsessed with me.  He didn’t want a family, he didn’t want to be a father to our sweet son. He just wanted to own me, and his only pleasure was in tormenting me.  I was followed by him whenever I left the house alone.  My car was broken into and trashed, and I was harassed by him at work for months.  He called me at work almost daily just to be an asshole, and would leave horrible messages about me on the firm’s answering machine. Sometimes when I was leaving the office, he would be waiting by my car in the parking lot. I had to always be on my guard, because I was absolutely terrified of this man.  It became so bad that I developed a heart condition brought on by the extreme stress, and I had to quit my day job.

When it became apparent that he just wasn’t going to go away, and there was nothing that the police were able to do short of sending an occasional patrol car down the street, I made the difficult decision to leave my baby boy in my parents’ care and I left town.  It was the hardest choice I had to make, and though in my heart I know it was my best possible play, it left the bitter taste of guilt in my mouth.

He took the bait.  The calls to my parents’ house decreased to almost nothing shortly thereafter, and he was rarely seen around the neighborhood.  After a few years, the calls stopped altogether.  He may have been in jail again, or moved on to a new obsession.  Who knows?  All I knew is that my child and my family were finally safe without me in their daily lives.

The Gut-Wrenching Road Back

My road back home would be a long, dark, and twisting one.  I was always looking over my shoulder, wanting to trust somebody but never knowing who was safe.  Day jobs weren’t an option for me. I was too afraid of being somehow seen by him or one of his cronies. I moved frequently, wearing wigs and taking shit jobs in nightclubs and dive bars under an assumed name.  It wasn’t long before paying the bills meant taking off my clothes and using my young, beautiful body.  For me, that path started by dancing nights at bikini bars, modeling lingerie, and working as an oil covered fantasy wrestler.  Within a year on the run, I had taken on a new identity as an adult-industry performer.

I called home from time to time to let my parents know I was safe, and to talk to my son and tell him that I loved him so, so much. I made very infrequent visits, and each one was gut-wrenching. “I love you!  Be a good boy for Grammy and Poppy. Mommy will be home to stay soon, honey. I promise.”   And oh, how I wanted that to be true.  My shame was such a burden.

A Bleak Future, A Nice Guy, and a Tough Transition

After nearly six years in the adult entertainment industry, I was so spent, so broken inside.  Every shift on the stage was cutting apart my soul.  Every time I looked in the mirror, I saw a stranger looking back at me. A scared, beautiful, heartbroken stranger.  And every time I looked around at the girls, the women who were living the underground life that I was, I saw a bleak and very short future.

Near the end of my career, I met what the girls in my former business called a unicorn: A Nice Guy.  And the best part is that even though he knew what I was, he never saw me perform!  When he looked at me, he didn’t see a stripper or a whore.  He saw a beautiful girl.  He saw my sparkle.  And for me, having someone see beyond my exterior gave me the confidence and the hope to break free, to start over.

After a few months of dating A Nice Guy, I knew that it was time for me to get out of the business and try living a normal life again.  I had taken a small flat near my hometown, and quit dancing and club work altogether.  I was having more visits with my son and trying to rebuild my relationship with my family… and even some of my old friends (the good ones).  My parents welcomed me back with open arms, and I moved back into my childhood home. I was still cautious, and always nervous about running into my ex.  I was relieved when I learned that he had found a new girlfriend, and while I felt bad for her- whoever she was- I admit that I was just glad that he wasn’t my problem anymore.

The End of Me & A Phone Call From Heaven

I wish I could say that becoming a full-time Mom again was an easy transition, but I would totally be lying.  It was incredibly hard because I had NO DAMN CLUE how to be sober, how to be gentle, how to be nurturing.  I hadn’t dealt with my trauma at all; I had only created more of it in the years I was on the run.  I was not just angry, I felt rage. I was not just scared, I felt terror.  And though I wanted so desperately to be loved, I couldn’t reckon how to show love for anyone else in a healthy way, because I hated myself.  Then and only then did I find my true Rock Bottom: I was convinced that I my life was no longer worth living, and that my family would be better off without me. The world would be better off without me in it.

Sitting on the floor in my old bedroom, late at night, my sweet child asleep and the rest of my family had all gone to bed, I decided to end my life.

I wrote a tearful letter to my family and told them how I sorry I was for all the years of pain I had caused them.

I kissed my sleeping baby boy.

I prayed to Whoever or Whatever was listening, if there was Anyone, and asked that my life be recycled into something better than the mess I had made of it.

I grabbed a couple of bottles of pills from the medicine cabinet in the kitchen, swallowed a handful and was just about to leave the house when the phone rang.  DAMMIT. Crap, I thought, I need to answer before someone wakes up.

On the other end of the line was an old, dear friend of mine.  A friend who had become a pastor at a local church. “Michelle! Hey, I’m sorry to call so late, but God just really put you on my heart tonight. I just had to reach out!”

My friend continued, “I heard you are back in town, and I know this is last minute, but I wanted to invite you on a camping trip with my church college group.  It’s in a few days, can you join us?”  I don’t know how else to describe it, but in that moment, I knew that God- however you may understand God to be- had heard my desperate prayers and was answering them through this phone call. I felt a warmth fill my body, as if I was being hugged from head to toe. “Yes, I would like to come along,” I answered my friend, warm tears streaming down my cheeks. “Thank you. Thank you so much for calling.”   As I hung up the phone, I knew that I was going to have a second chance at life, and I was going to do whatever it took to live it beautifully.   But first, I would need to stick my finger down my throat and get the pills out of my body.  I did, and I added my torn-up goodbye letter to the toilet, flushing it all away.